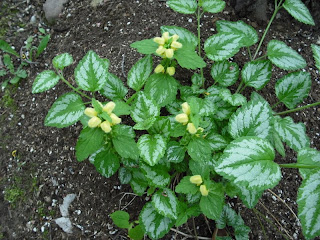 I went for a walk around our property today, and was pleasantly surprised to find so many things in bloom.

This is a surprise plant. It's a variety of Lamium, and it is one that I discarded in the woods last year. I like the vari-colored leaves and it's trailing habit for my porch pots, and I dumped the entire planter in the woods when I cleaned up last fall. The soil around this plant is still a flower pot shaped hump. I think I'll dig it up and put it in a pot again this year. 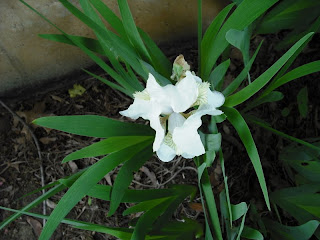 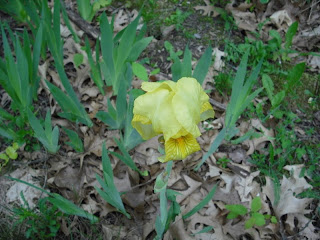 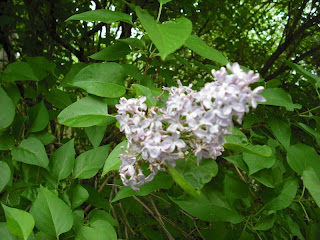 Irises and lilacs are among my favorites. I received the yellow irises from a friend and they've multiplied quite a bit. This one is growing at the edge of the woods. I suspect I must have gotten tired of planting them and tossed it there. 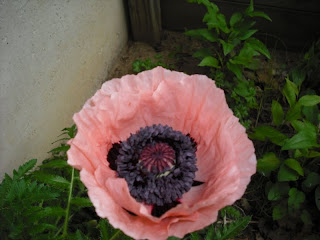 Here's my first oriental poppy of the year. I grew this one and about a dozen more poppy plants from a packet of seed I bought for 10 cents at a yard sale a few years ago. 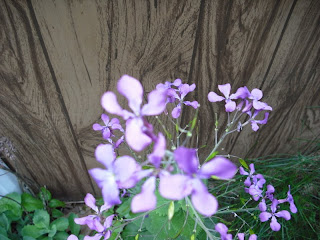 This is lunaria, a biennial. It's pretty, but a nuisance plant, self seeding with abandon. One plant can turn into dozens in just a few years. I pull most of the seedlings out, but I think its pretty, so I always leave a few and resign myself to the task of keeping it from taking over. It's the one that produces those pretty dried seed pods that are round and silvery, hence the common name, silver dollar or money plant. 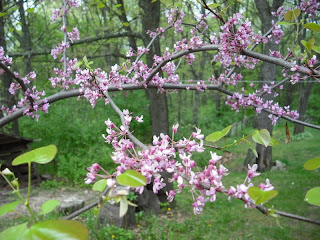 This is a redbud tree in bloom. My father in law grew it from seed, and its growing at the edge of the wooded area around our house. 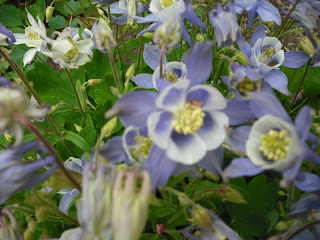 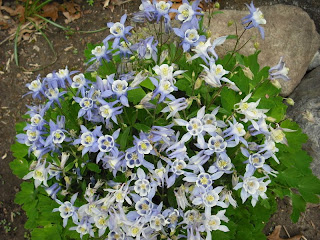 These beautiful blue and white Columbines are one of the most carefree flowers I ever planted. They grow without any pampering whatsoever. I just tossed a few seed where I hoped they would grow, and they did. The only problem is that they do self seed quite badly. No problem though, I just dig up the plants and give them away or plant them elsewhere. If I'm really on the ball, I can solve the problem by taking the seed heads off the plants before they open. These plants produce tons of seeds, many of which I've collected and given away.

The dogwood trees are also in bloom as is some of the wild honeysuckle, but I didn't feel like fighting my way into the woods to get their pictures.
Posted by Gardener at 8:16 AM