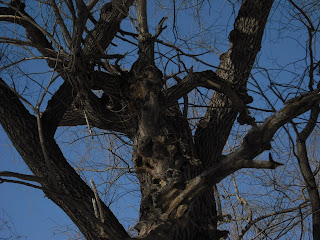 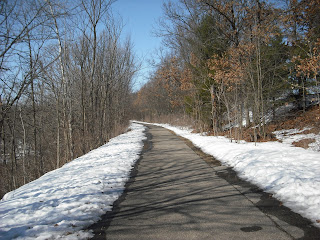 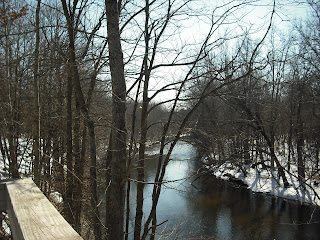 We've had unusually nice weather for the past week or so. Sunshine in winter can be rare here, but it has been abundant lately. On Saturday, Andy and I went for a walk on a part of the White Pine Trail which runs north from Rockford, along the Rogue River. There were quite a few people out on the trail, biking and walking. The trail was clear, although there is still a fair amount of snow on the ground.
The sky was a beautiful shade of blue, and the river was sparkling in the sunlight. We could hear the birds singing and the honking of Canada Geese. We only saw two geese on the river, but it sounded like there was a whole flock somewhere around. There was also a lone mallard swimming lazily around and some tiny animal that appeared to be playing in the water, running around on the shore of a little "island" in the middle of the river and then getting into the water to swim in circles for a few minutes. We forgot to bring binoculars, so we have no idea what it was. We were wondering if it could be a baby otter or muskrat. It seems like it might be a little early in the season for animal babies yet, though.
Posted by Gardener at 7:50 AM