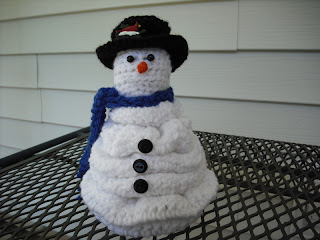 I saw a really cute snowman made from fabric yo-yo's the other day. I wondered if I could re-create it in crochet and this is the result.

First you will need to make at least 6 yo-yo's. These are three dimensional, similar to the kind that are made for use in quilts or for embellishing things, rather than the flat circles that I would consider a crocheted yo-yo.

This snowman would work in any size yarn; for example: thread would make a tiny ornament. Once you get the basic idea of how he is constructed you can easily make him taller, shorter, fatter, etc.

You could also make a Santa, by using red yarn for the yo's, maybe with a black center yo-yo for his belt. Add a Santa face and hat, put a buckle on the belt, embellish with some whiskers and you will have Santa Claus. A pumpkin is another idea that would work up really easily this way. I think it would even work to make an angel.

First make 5 different size yo-yo's. You will need a total of 6, but two of them are the same size.

Materials
-WW yarn in white, (I estimate that I used between 3 and 4 Oz), small amounts of black, orange, and blue
-H and G hooks
-buttons, beads or whatever you would like to use for embellishment
-small amount of white stuffing for head
-Yarn needle
-sewing needle and black thread (used to sew embellishments onto the snowman, you could glue them on instead)

Special Stitches
These are the way I did these techniques, not necessarily the correct way. You can use whatever method you like. Neatness and accuracy aren't that important here, since this won't show much.

The body of the snowman is made up of yo-yos: 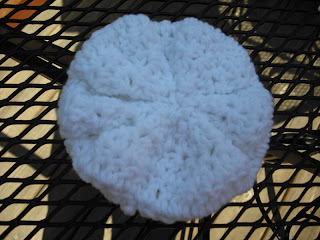 Use White yarn and H hook

Note: Start all DC rows with a Ch 3, start all HDC rows with a ch 2, (these count as stitches)
If a row is done in SC, start with a ch 1 and do a SC in the same stitch. In this case the ch 1 does not count as a stitch.

Finish all yo-yo's by gathering as directed in Yo-Yo 1.

Everything except the scarf is worked in rounds.

Yo-Yo 1 (make 2)
Leave a very long tail (say around 24 inches) on one of these to use for sewing the yo-yo's together. If you forget, don't worry about it, you'll just have to weave in an extra end!)

Ch 4 and form into a circle with a ss.

Now start decreasing:
Round 5 and 6: Ch 3, DC decrease over next two stitches around, until you get to the last st. Dc in that st, and join to the top of the beginning ch 3

Fasten off, leaving a tail 8 or 10 inches long. Thread this tail into a yarn needle and weave the yarn through the stitches of the last row. Pull together tightly to gather the yo-yo into a fluffy shape. If its not fluffly looking enough for you gather up a few random stitches from the previous row also. The gathered side is the top of the yo-yo.

You should have something that looks like a squashed ball, pretty flat on the bottom and sort of ruffly and wrinkly on the top.

After round 4 do a row where you increase in every 4th stitch. (60 DC)

Same as yo-yo 1, except use HDC in place of all DC's. Use HDC's to do decrease rows rather than DC decrease.

This should give you 6 yo-yos, in 5 different sizes.

Fasten off and weave in all ends except for the long tail that you left for sewing the yo-yo's together. To assemble the snowman's body from the yo-yo's stack them in this order, starting from the bottom and working up to the snowman's neck:
#1, 2,1,3,4,5. The largest yo-yo is second from the bottom and they get progressively smaller as they go up. If you wanted to, you could make an additional yo-yo #3 and use it as the bottom yo-yo. This would give a more rounded silhouette to the snowman. The bottom yo-yo should have the long tail for joining the yo-yos together.
To join them together, thread the long tail onto your yarn needle. Pull the yarn up through the center of all the yo-yo's. when you get to the top, turn around and go back down to the bottom. Make sure you catch some strands of the top yo-yo before you go back down. You can either fasten off or repeat this step to make the joining a little more secure.
I forgot to leave a long tail, so I just brought a long strand of yarn up through the yo-yo's back down again and then I tied the ends together and tucked them into the bottom yo-yo.
One time up and down seemed secure enough to me, but my snowman is just going to sit on a shelf. 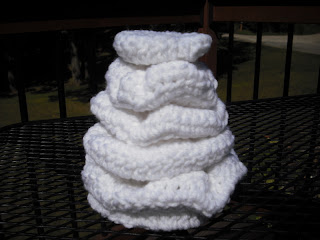 Use white yarn, and G hook.

(If you want a larger head do another increase row, increasing in every 2nd stitch as in yo-yo one, before continuing. My snowman's head was too big, when I did this. I actually still think my snowman's head is a little too big, but this is a matter of personal preference. You could make it smaller by doing 10 HDC's in round 1 rather than 12)

Weave in beginning yarn end. Stuff head with stuffing. To some extent you can control the head size by the amount of stuffing you put in it. Thread tail on yarn needle, and gather bottom of head together to form it into a ball. Leave a tail long enough to use for sewing the head to the body.
Sew head to body.

Use black yarn and G hook.
Work through round 2 of Yo-yo 3.
(note that if you made a larger head, you may want to work another increase row (possibly in sc) before starting the sides of the hat)

You can make the brim wider by repeating round 2.
Fasten off and weave in ends. Shape hat brim with your fingers.
Sew hat to snowman's head. I used the end tail to do this.

Chain 45, (or however long you want the scarf to be,), turn and HDC in 2nd chain from hook and in each chain across. Fasten off. I added some fringe to the ends of my scarf.
Tie scarf loosely around snowman's neck.

Now that the snowman is assembled, give him some personality with embellishments.
I used beads for eyes, buttons for buttons, and sewed a cardinal button to his hat. I made an orange yarn french knot for a nose, but I haven't managed to give him a mouth yet. I've tried three times to embroider one on, and none of my attempts worked out. I'm going to leave it like this for now and buy some smaller black beads next time I'm out and use those for his mouth.

Pattern is untested, except by myself. Please let me know if something is unclear, or you find a mistake.
You may sell one or two items made from this pattern, but you may not sell the pattern or publish it anywhere else. Please link to the pattern if you post a picture elsewhere.